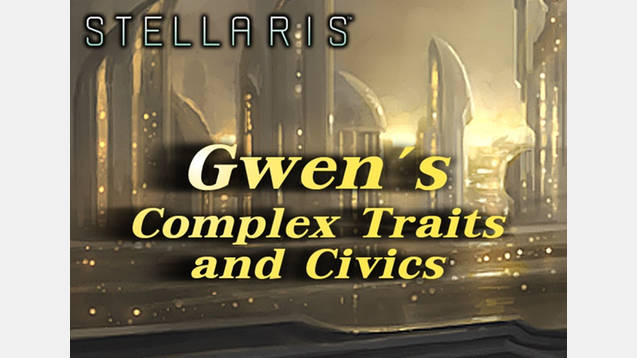 Bonus leader traits are in addition the the normal traits a leader of a specific species gets and are only available to leaders of that species.
The current Total is around 40. I expect to up this number every few days.

If you have any concerns over power or any glitches please let me know.

Species Trait Mods
Gwen’s Simple Traits
This mod adds around 41 new traits many with up to 5 levels to choose from for each as well as negative versions.

Gwen’s Zero Cost Traits
This mod adds over 50 traits aimed at adding flavor and balancing around a cost of 0.

Gwen’s Starting Techs
This mod adds racial traits and civics that grant you techs at the start of the game.

Leader Trait Mods
Gwen’s Misc Leader Traits
This mod adds over 80 leader traits. I based them as much as possible on what I could gather of the inherent math of the game.

Gwen’s Leader Flaws and Virtues
This mod adds a flaw and virtue system to the game. Flaws grant an additional 1-2 trait points to a leader. Virtues cost 2 to 3 trait points and are as good as 3 or 4 traits. This is designed around the game’s default of 1 trait point of leaders and 2 for rulers.

Other Mods
Gwen’s Space Cowpoke Namelist
This mod adds a new namelist inspired by a line in Bon Jovi’s “Wanted Dead Or Alive”. Specifically the line “On a steel horse I ride.” Ship names are a combination of a metal and a real life horse breed. Every possible combination exists.

Gwen’s Domesticated Xenofauna
Breed your own space creatures and discover genetically modified strains to use in battle agaisnt your enemies.

Gwen’s Subject Types
Several new subject types for you to turn other empires into.