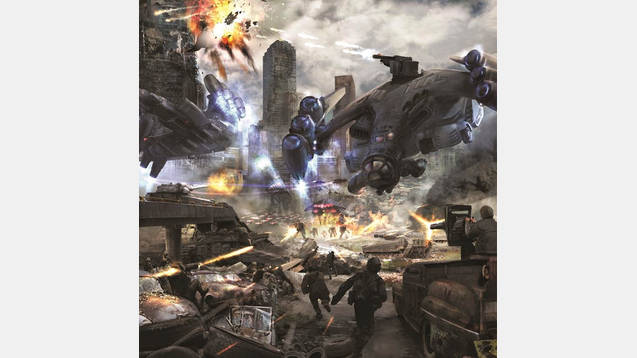 Was heavily influenced by Prepare for Ground Assault! mod.

Drastically changes how ground combat and orbital bombardment are performed:

– Orbital bombardment takes much longer and has severe effect on infrastructure. Light bombardment is now mostly precise strikes against military targets and will not damage infrastructure. Full bombardment will cause collateral damage and you can wipe planet with it, but it will take some time.
– To kill any POP fortification must be reduced below 1%. For building to be destroyed fortification must be reduced below 50%.
– Ground combat now takes much longer and there are less Win-Or-Loose situations, sometimes you will need multiple attacks to take the planet.
– All armies are now rebalanced with increased cost and maintenance, but they are more powerful. Less armies needed so less micro. Damaged armies regen slowly and have 3x maintnance cost during regen to make planet assault a bit more impactfull to attacker economy.
– Garrisons now make sense.
– Opinion mauluses for using Limited and Full bombardment for Xenophile and Pacifist empires as bombardment is quite powerful now (Pacifists really dont like bombs now!).


Will need some polishing in balance, please leave comments.

Chnagelog:
1.75 – increased robot and android army damage by 10%. Increased AI willingness to land armies.
1.7 – updated to 1.6 – robotic/android defense armies re-balanced. Armageddon bombardment now has greater chance to destroy buildings.
1.6 – updated to 1.5.1 – armageddon bombardment is quite powerful now compared to lighter versions. (though damage to planet tiles and pops is the same as FULL as it seems there is no way to change it). Few minor changes to armies locked by ascention perks to make them a bit stronger. (a smaall bit)
1.5 – update to 1.4
1.4.3 – bug fixes
1.4.2 – mauluses for bombing POPs to death are now doubled and are now more in the line with purging.
1.4.1 – slave armies are now a bit nerfed, they were way to OP for their cost and maintenance
1.4 – balance pass for amies
1.3.4 – rebalanced robot and droid armies as they were too tough.
1.3.3 – Now only Full bombardment can wipe out the planet, other stances will not kill last POP on planet.
1.3.2 – balance pass – maintnance reduced to 80% from previous version.
1.3.1 – It was possible to station one corvette on orbit and wipe the planet. Now to kill any POP fortification must be reduced below 1%. For building to be destroyed fortification must be reduced below 50%
1.3 – Added Opinion mauluses for using Limited and Full bombardment for Xenophile and Pacifist empiers as bombardment is pretty powerful now (Pacifists really dont like bombs now!)
1.2 – Balanced Fortifications, now full fortification gives 39% damage reduction to defending armies. Orbital bombardment as toned down a bit, as it was too easy to wipe colonies out even on Limited bombardment stance. First balance pass for armies and attachments.
1.1 – Fixed some wrong values for orbital bombardment
1.0 – Initial

Thanks:
Ventessel for letting me use files from his mod Prepare for Ground Assault!.