Gods and Guardians For Stellaris 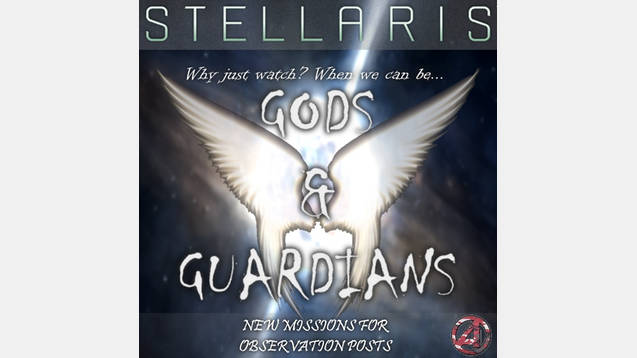 Gods and Guardians For Stellaris

We Are Your Gods
The natives are led to believe that you are their gods. You effectively enslave them from above.
Cannot be used by: fanatic spiritualists, fanatic xenophiles, xenophiles or fanatic pacifists.

We Are Your Guardians
You actively aid and guide the natives, but you do not advance their technology. They are allowed to develop at their own rate and may ask you to leave at any time. (This doesn’t mean you have to!)
Cannot be used by: fanatic spiritualists, fanatic xenophobes or fanatic authoritarians.

The Q-Bricks
A number of complex and totally impenetrable devices are placed on the planet that monitor the behaviour of the natives and allow you to make small (sweeping/massive) adjustments to their evolutionary path and rate, as well as guide their overall development as sentient life-forms.
No ethics restrictions. Has tech requirements, which will be shown when you mouse over.

See the screenies above for more info on what the missions do and what the restrictions for use are.

If an Observation Mission isn’t displayed, you don’t have the ethics needed to use it. If it appears but is greyed out, hover the mouse over it and it will list the requirements.

Vanilla missions that can’t be done in a particular instance will be removed in preference for vanilla or mod missions that can be done. There’s now eight slots for buttons, thanks to UI work by subscriber ‘Calamity’.