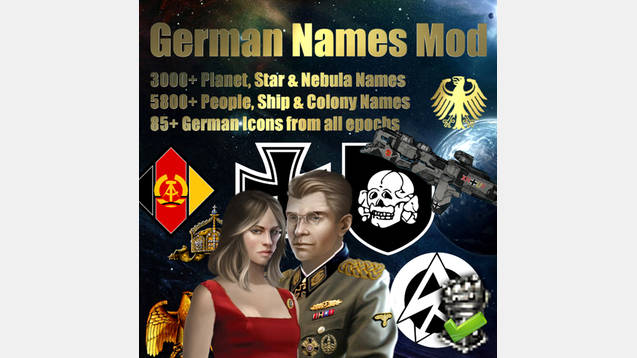 
This mod turns your galaxy German in addition to your ships & people names.
Should be compatible with almost all mods, but certain features may need to not be used, German ship type if you use a mod that affects the basics.
Only file replaced is the 00_random_names.txt to make the galaxy German.

For a more involved & modded game, see my Iron Sky mod, with a complete overhaul of most facettes of the game to a German theme, techs, traits, ship weaons, modable stations, gaia terrorforming plus avery large list of other otions. IronSky – Space Nazis

If you would like your own custom themed mod created, $30-$50, contact me to discuss.
*This mod has a Nazi theme, so if you are politically correct &/or easily offended… or it’s illegal in your country… simply do not download it. You control your own happiness.
It makes no attempt to be historically accurate, it is just to have a wee blitz in space…
**Imperial skins are from Ulmonts “Imperial German Portraits” mod.
Traducción al Español por Werwolf-NS