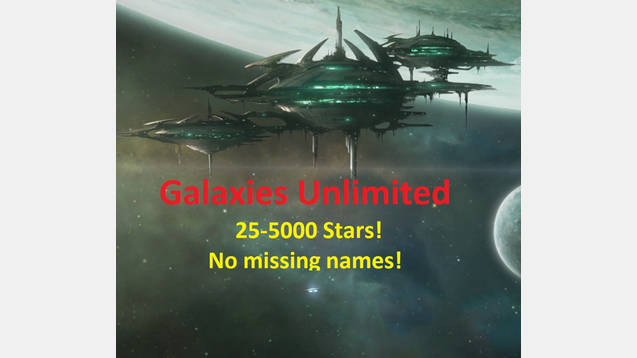 Updated 05/11/2017 (Game Version 1.6.0)
– Adjusted starting locations, so they are not as near to the edge of the map (Sometimes buged out graphically).
– Formatted all capital star names to match rest of galaxy.
– Adjusted which map sizes can play which map types, based on space to spawn stars.
– Made Clustered starts spread equally similar to Taw’s No Clustered Starts. (Use random to make starts like before).
– Other small tweaks

Known Issues
– Victory condition met at game start. Harmless, just restart.(Increase planet chance for smaller maps)
– Sometimes starting factions at edge of map do not have name appear (Hopefully fixed in this update)
– Slow down on slower PCs with larger galaxy maps. (Don’t play on the 4-5k map if you don’t have a fast PC, ie, i7 4ghz+, 16GB+, High End Video Card)