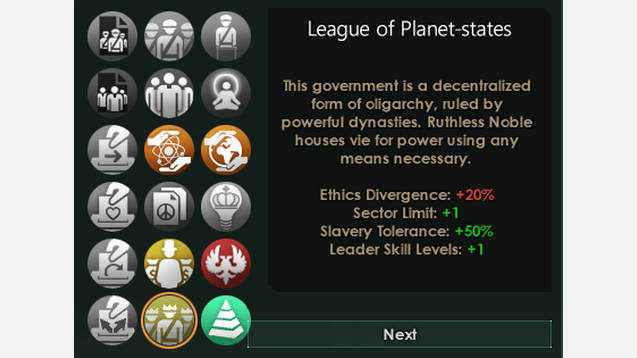 Adds three new government types and changes some existing ones.

The new governments are a new ‘row’ of generic governments, so you have more options if you don’t take militant/pacifist/spiritual/materialist. The governments are an attempt to simulate more decentralized, wide structures, which is pretty hard since all governments practically use centrally planned economies in this game. The exception is the sector management but there aren’t any modifiers that interact with it except for the sector cap, which doesn’t seem that important. Another modifier that is interesting is the ethics drift mechanic, but that is kinda of broken currently. Still, I think there are interesting possibilities there. These are the new governments as I have them now:

(basically the old empire from Dune, a governor focused government)

Theocratic Oligarchy now has a unique edict that increases building speed, to make it a bit stronger.

Royal gardens give a food multiplier and influence, to set it apart from the paradise dome
—
If you encounter any bugs, please let me know!

In the future I’d like to add more unique edicts, mandates and buildings and make governments overall more important. If you have any ideas or suggestions you can post them in the comments.