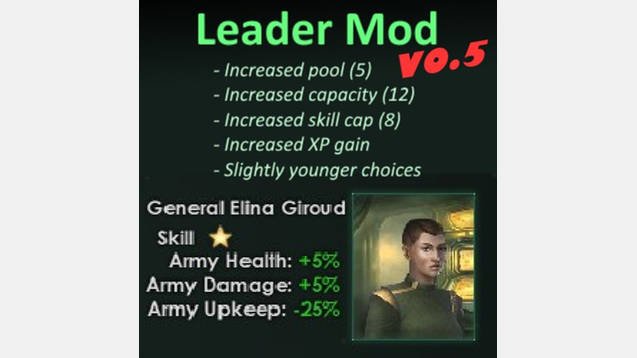 This mod changes leaders to be more important by allowing the player to select from more of them, have more leaders active, and increase their skill rates and caps. Generals, specifically, have received a small bonuses to XP gain. Leaders can also be slightly younger than before.

This mod is NOT a hard defines edit.

V2
– No longer dependent on defines.lua. You can use other defines mods now.

To-do and Ideas:
– Use separate skill icons for military (ranks), science (degrees), and politics (achievements).
– Add more ways to gain XP.
– Passive XP gain (needs revision).
– More traits.
– Make governors generate a very minuscule amount of influence based on their level. Very small increase in income and minerals based on level.
– Make scientists generate a very minuscule amount of research based on their level. Increase in scanning speed and anomaly chance based on level.