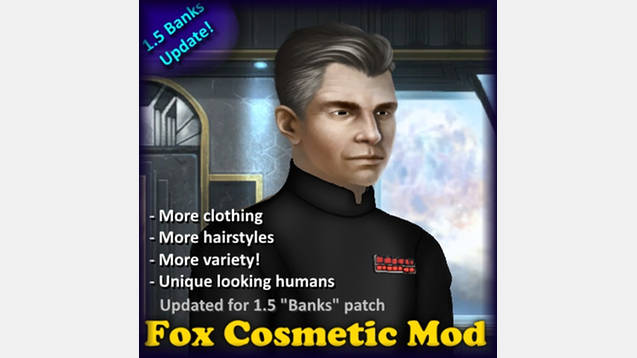 Updated for 1.5.1 this mod adds a variety of human cosmetic options based on government type.

This mod adds a LARGE number of new outfits to the basegame humans. The clothing each human wears is determined by their government type and their role, thus, militant governments look militant, republic governments look less militant, and oligarchies look corporate.

I should note, this has nothing to do with foxes. Think of “Fox” as a brand.

V0.2
– Added unique graphics for Direct Democracy Chancellor and General (based on Face of Mankind).

Compatibility:
– Is savegame compatible
– Incompatible with other mods that overwrite human default hair and clothing.

Bugs:
– One model is bugged for humans. It should only show up during ruler creation, it isn’t generated. Not sure what model is causing it.
– The new beards are bald on top. I need to implement those with the hairs.

DISCLAIMER:
I am NOT a professional artist by any means. I am going to continually improve and revise these outfits so long as there is interest. Don’t expect miracles.

SPECIAL THANKS:
Terson Darkstone for showing me how to shade and revising militant general (the mobile infantry dress uniform)
Dibujor for helping on the forums with coding support and brainstorming.