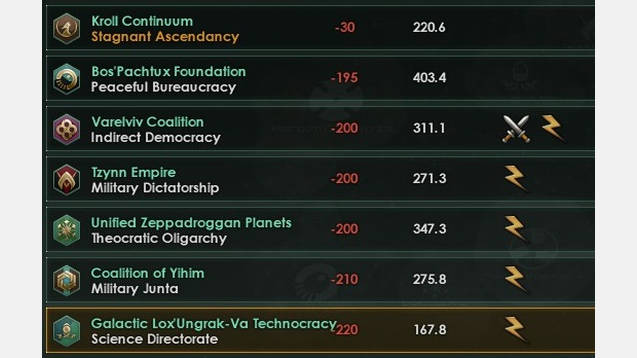 A small mod to make the universe extra-Xenophobic and warlike, but along species group lines (Reptilians, Humans, Avians, etc.) It is implemented as a -200 opinion penalty for anyone outside of your own species group. I’ve done a bit of testing and observing, and it seems to make wars/rivalries more likely and also makes finding and teaming up with your own species in the universe more important. I was going for a more aggressive, violent and awful universe a la Warhammer 40k and seem to have achieved it. I was seeing very common rivalries within 5 years and wars within 15. This is a universe where you may very easily end up with no friends, especially in the early game.

The default xenophile/phobe traits remain, but now really only make a difference when it comes to within the species group since the inter-species malus is so high.

For those who like to align their universe around other traits it would be fairly easily to mod my mod to your tastes – hopefully it’s helpful for you as an example of how to do it.