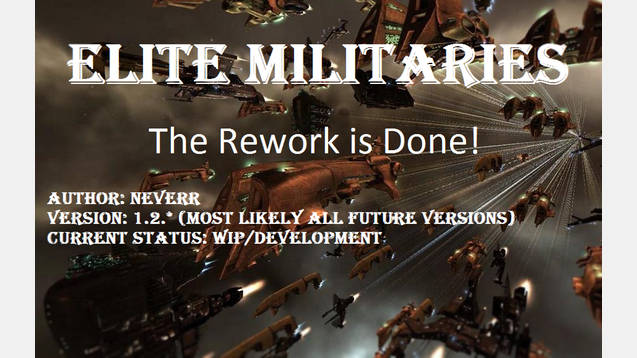 If you want to see this mod continue to grow to it’s fullest download the addon! It’s going to contain all new technologies not pertaining specifically to the policy/EM growth.

For Those who Use the Awesome New ships and more Mod, here’s an official Compat Patch!

Elite Militaries is an attempt to grasp the full potential of What Stellaris Could have been! Have you ever wondered why the military combat is so incredibly stale when regarding vanilla stellaris? Why is it that a battleship made 1000’s of lightyears away from another battleship has the same level of armaments, strengths and weaknesses? What is diversity? EM is a Semi-Overhaul mod in an attempt to fix this very problem. It provides the player with a vast amount of choices regarding different unique militaries all with their strengths and weaknesses. From the Technological Savants to the Militarist legions to the xenophobic exterminators, you’ll have choices on a whole myriad of different playstyles!

EM takes into account your ethic choices, and which early techs you choose to research and based on those factors different militaries that suit your choices. You have a chance to obtain different EM’s even going the same technological path twice, but the chances are weighed towards how you play! A Spaceport rushing player with fanatic militarist will more often than not get Imperial legion to spawn as an EM in the tech choices.

So What’s all in this mod?

I’m glad you asked, let me give you a quick bullet list of what’s in and what’s to come!

– A Whopping 10 different EM’s to choose from come the 20 year mark, each with their very own 2nd Gen Evolution!
– Come the 70 year mark when access to the second Gen EM’s come along you have access to a unique pool of policies dedicated to the EM of your choice. Each with their own strengths and weaknesses they offer even more diversity to the game!
– AI are far more likely to spend money on Military than in Vanilla Stellaris
– (In Progress) A Whole Freakin Slew of weapons! Some only obtainable with your unique 2nd gen EM, others obtainable as new first gen EM weapons accessable to all to diversify the current combat system.
– (Up Next) Cleaning up the compat patches from within the mod and seperating them into seperate add-on mods to allow players to not have to deal with those hidden modifier errors (Shouldn’t cause any crashes but it’s not pretty to look at!)
– (Up Next) A Huge Overhaul on AI intelligence regarding EM specifically (Yes that means it’ll still work fine with any AI enhancing mods as this will only touch up on EM techs and behavior!) to make the ai use EM intelligently and coherently.

Imperial Legion – (FANATICAL MILITARIST) Overall Slight buff to military expansion through additional fielding capacity and a HUGE Focus on battleships. As the Imperial Legion boasts raw power over anything else.

The Great Purge – (FANATICAL XENOPHOBE) Modified weaponry to do massive damage bonuses at the cost of less evasion on their ships and a slower firerate Their ships are more durable also at the cost of most other races despising them for their views.

Freelancers – (FANATICAL INDIVIDUALIST) A Massively specialized military with weakened weapons for a MASSIVE bonus to firerate. These ships are also extremely durable at the cost of being overly expensive and a very small fleet capacity.

Rift Walkers – (FANATICAL MATERIALIST) Their Ships have technology so advanced their entire race can only field a single batallion or two at a time. With Slow Firerates to charge their weapons massive firepower and an incredibly durable hull to sustain the damage they are taking, these ships are dangerous even alone.

The People’s Bastion – (FANATICAL PACIFIST) Slightly Stronger ships and a largely reduced fleet capacity in favor of massively increased Defensive station prowess. This military have also nearly perfected the art of self sustanance, their defemsive stations have little to no upkeep while doubling up as the most destructive singular weapons in the galaxy.

The Grand Alliance – (FANATICAL XENOPHILE) With their beliefs of molding various cultures into one, they have adopted that doctrine into their military structure allowing for their fleet to have some of the best and most efficient techs that their races can offer. Their offset is a larger ship cost to make the various technologies compatible with each other.

The Hive – (FANATICAL COLLECTIVIST) Their ships are very flimsy and fall to opposing weaponry easily. Their firerate and weaponry are also weaker than the average ships. All of this is because they have sacrificed these things for the cheapest ships in the galaxy. Their ships are produced at a rate 15 times that of any other ship and can field fleets bigger than any other. Their ships also have combat speed comparable or better than Rift Walkers.

The Holy Crusade – (FANATICAL SPIRITUALIST) Their ships are designed around the idea of faith, they have weaker armor and less weapon damage with an increased fire rate. Their evasion is massively buffed making their dogfighters uncomparable in skill. They have also streamlined production of their dogfighters to further push their skirmishing powers.

Space Pirates – (NO FANATICAL ETHIC) As a Space Pirate you and your people have been more at home in space than you have ever been on a planet. While your motley crew understands the necessities of habitating high mineral density planets, none of them appreciate or like the idea. The unbounded stretches of space is where your people belong, and you seek to grant them that very comfort by making sure your people can spread their wings freely in the galaxy. Other Races have branded you pirates for your fleeting ways and lack of a stable environment, a name that your people embrace and have taken for their own.

Traders Coalition – (Any Ethic combination) The traders coalition is a very specialized nation build from the ground up with nothing but businesses controlling the government. As such even their military ships act doubly as cargo freighters producing income for you. As the EM grows the smaller ships become escorts for the larger super freighters. Do you have what it takes to conquer the galaxy as a trader? ???? (No actual way to win by trading, still military conquest loves D:)

~I am in need of ideas for additional Elite Militaries for those who like to play without any fanatical ethic. Give me your ideas over in the discussions tab!
~Playtesting and feedback. Lots of it ????
~Have fun and Enjoy my mod!

Seshien – For helping me clean up the syntax errors on my end of the mod! You made things a lot easier for me, thanks!

Everyone who contributes: You guys have offered me awesome feedback and it’s helped keep me motivated to push new content and clean up the mod! It’s been great!