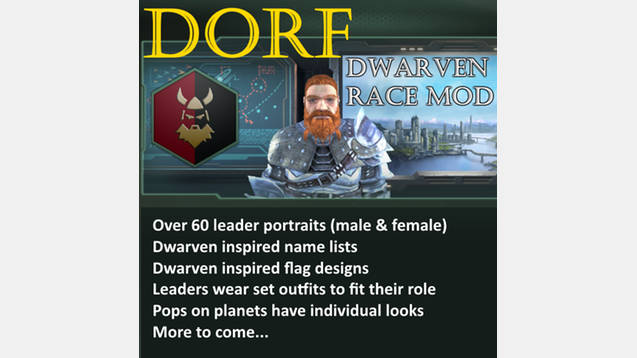 Dorf adds Dwarves as a playable race in Stellaris along with some related Dwarf inspired assets.
NB: By default the Dwarf species is not set to appear randomly in games as an AI.

Features
Playable Dwarf race in its own species section (Create New > Appearance)
Dwarven non-animated artwork for race portraits (distinct male and female versions)
Leader roles have distinct sets of outfits (e.g. scientists and generals do not wear same clothes)
Dwarven Race and Homeworld suggested names
Dwarven inspired name list (pops, planets and ships – a mix of fantasy/realistic)
Dwarven inspired flag icons (by default these are not set to be used for the AI)
How to use this mod
Start a new custom game and choose Dwarven from the species list

Make sure to choose the Dwarven name list. This is not set automatically when you select the race.

Known Issues
I have chosen to leave Dwarves as a separate group in the species list (at least for now). Technically they could go in to the mammalian group now that the scroll bar is working (post Stellaris patch 1.1.0), but this will be looked at in the future update.

Dwarven name list does not appear as an option when running with the 40K: Twilight Imperium Mod. Everything else works as normal though.

When starting a new game you may get some portrait variations repeated in your initial batch of leaders and pops. This may be a problem with the random number generator of the game, as increasing the choices for the game to choose from still consistently creates duplicates on a new start. After the first batch of portraits are chosen, variations appear to be selected much more randomly when new pops and leaders are added by the game.

I am aware of quality issues with some images (e.g. jaggies) and I intend to go back and improve on these over time. Unfortunately, my ideas are big but my Photoshop skills small

Dorf was primarily designed as a player race and has not been extensively tested as an AI race. However, it should also work as an AI race, please let me know if you run in to problems.

Bug reports and Suggestions
If you encounter a problem with this mod or have a suggestion to change or add something, please post to the Discussions tab above, NOT to the Comments section.

FAQ
Q. Can I use your assets in my mod?
A. Yes that’s fine, but if you could credit this mod and add a link I would be grateful.

Q. How can I add Dwarfs as an AI race?
A. By default they are player run only. To add them as an Ai race start a new game and create a custom Dwarf race, then when finished click the Save button instead of Done. Return to the main menu and you will see the Dwarf race you created. Click on the Phoenix icon to set the race to appear as an AI race in game.

Q. Why is it called Dorf?
A. Many (many) years ago when I played Everquest(1), Dwarves were often referred to as Dorfs in an insulting manner by other races. I played a Dwarf and actually kind of liked the nickname.

Dorf v1.06 (14July2016)
Fixed: Mod was not showing as compatible in the latest game client.
I’m very sorry for the lack of updates. IRL I’m simultaneously moving jobs, home and to another part of the country. I do intend to continue development, but realistically it may be a couple of months until I’m settled enough to dedicate any significant time to this project again.

Dorf v1.05 (07June2016)
Fixed: Mod was not showing as 1.1.0 compatible in game client. I had only updated one of the two copies of the descriptor files, now fixed – sorry about that.
Update: No additional extra content in this update. I’m experimenting with Maya at the moment to see if I can animate the existing portraits.