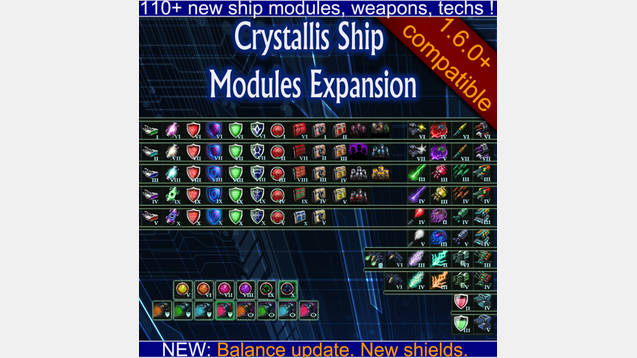 The following have been added:
Ship Sections

Techs
All modules have their own technologies. Some are rare. Tier 6 to Tier 10 modules come after their vanilla variants and techs, so these are very much late game technologies.
For those with Utopia DLC: The final tier weapon technologies only show up after you build the science nexus!
For those without Utopia DLC: the final tier weapon technologies will show up normally.
The science nexus increases the chance advanced component & weapons technologies show up by 500%
Techs have a start date before they can show up:
* New component techs will show up earlier (around 20-30 years gametime)
* Advanced (tier 6-10) component techs won’t start showing up until at least 80 years of gametime has passed.
* The next tier of advanced weapons won’t show up until 20 years have passed. (Example: tier 6 armor shows up at 2280, tier 7 armor won’t start showing up until it’s at least the year 2300)
* Advanced weapon techs won’t show up before at least 100 years have passed.
* The final tier weapon techs only show up if at least 120 years have passed)
* If you have bad luck: every 20 years that you don’t see a new component technology, the chance of it showing up goes up a LOT. If you haven’t gotten a specific component tech 40 years after it could show up the chance to show up increased by up to 500%.

Ship Power Stations?
Compatibility mod for Ship Power Stations mod here:
This is for vanilla ships only. There won’t be a compatibility patch for my mod + ship power stations + NSC, Realistic Ships, or any other mod that adds new ship types. (It’s not possible to balance, and it’s a lot of work). Sorry.

KNOWN ISSUES
** Some modules do not correctly apply their stats to the ship builder UI. This is an issue with the game and ui that I cannot fix myself.
** Auto-upgrade doesn’t work with my modules, presumably this is somewhat weirdly hardcoded
** Auto-complete will not always give the best module layout.