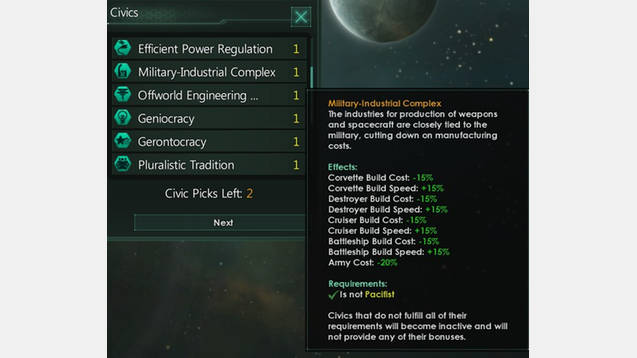 Mod adds several new civics to the game based on simple suggestions on the Stellaris suggestions board. They should be complete and relatively balanced. Be aware that this mod will likely not be compatible with many other mods since it must change many of the vanilla files to implement the more interesting civics and balance changes.

Balance suggestions and discussion is highly welcome. I’m trying to do some balance testing myself, but I’m only one person and can only do so much for something like this which takes a lot of time to do. Also, I accidentally played a bunch of testing on hard difficulty, which I have to throw out the window and start again for.

Traditionalist Faction – No longer demands specific government names, instead desires either that the government have some degree of spiritualism or a spiritualist related civic. Having neither gives -5 happiness, having both gives +5. Approved spiritualist civics are:
Imperialist Cult
Exalted Priesthood
Church Senate
Pluralistic Tradition
Totalitarian factions now have a 0 happiness modifier for having a dictatorial government, up from -5.
Credits:
Mod work by myself.
Ideas taken from Civics Suggestion thread, contributors listed there.
Icon art by ATP Kraken.