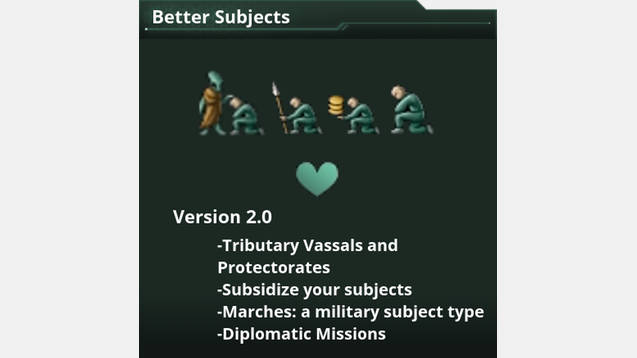 This mod adds new types of Subject Empires, policy trees that affect their taxation and/or subsidization, and a new mechanic of Diplomatic Missions.

By sending the Diplomatic Ship to your Subjects’ capitals, you can:

Negotiate the end of atrocities (slavery/purging)
Turn them into Marches, a special Subject Empire with a military focus
Exempt them from taxes
Each Subject Empire can receive only one diplomatic mission per year.

More diplomatic missions are in the works. If you have any suggestion or request, please comment!

Marches
Marches are a special kind of Subject Empire, with a military focus. They are not affected by our taxation policy, can colonize, can declare offensive wars* and have a large bonus to their military. With so many privilegies, they are also pretty loyal, with an extra +100 opinion modifier towards you.

(*note: you do not automatically join their offensive wars)

+30% Navy Size
-20% Ship Upkeep
+20% Ship Reparation Speed
+10% Weapons Demange
+10% Ship Interestellar Speed
Marches can be used to create proxy wars. Just turn that ax-crazy fanatical militarist Vassal into a March and watch him destroy your neighbors. But beware: Marches can rapidly increase the Relative Power of Subjects, making all of your subjects hate you. And if a march ever revolt…

You can have at most 3 marches at a time (Fanatic Pacifist: -2, Pacifist: -1, Militarist: +1, Fanatic Militarist: +2). Only Vassals can be turned into Marches, and oly through a Diplomatic Mission.

PLANNED FEATURES
More Diplomatic Missions! I think this system has a lot of potential and can add a lot of fluff to the game.
Events!
Maybe more subject types? I don’t have anything in mind, but am open to suggestions!
If you’d like to translate or have ideas for new features, please, Fork me on Github!

This mod should be compatible with games in progress.

Please, comment with suggestions and bug reports! Your feedback is greatly appreciated!