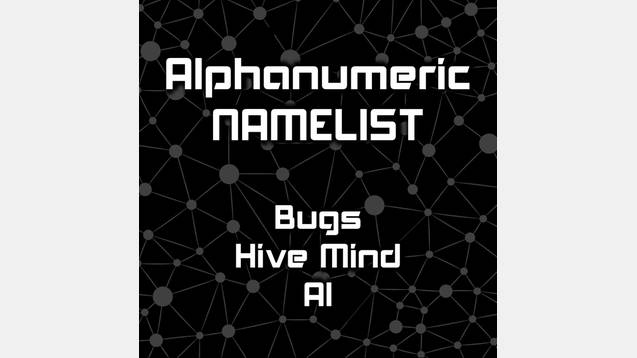 HIVE MIND, AI OR BUGS?
Alphanumerical namelist appropriate for Empires based on hive minds, AI, stuck up Vulcans and other collective beings.

When creating species I suggest you enter “First of” as ruler title (and heir title).

In the ship designer you find every class named […] D-00. This is the design number designator. When you upgrade the design, overwrite it, and then rename it to […] D-01. Then delete design D-00. Now you can order your ships to upgrade. They will receive the upgrades and be named […] D-01 class.

###Fleets
are automatically sequentially named. For some reason the empire window doesn’t preview that.

###Military ship classes
are named after their US Navy hull designator, followed by their section amount in roman numeral. This is followed by the Design number designator.
Example:
corvette = “FS-I D-00”
battleship = “BB-III D-00”

###Military station classes
are named with a shorthand for Military Station (MS) and a number designating their level, followed by their amount of sections in roman numerals.
Example:
military_station_small = “MS1 D-00”
military_station_large = “MS3 D-00”