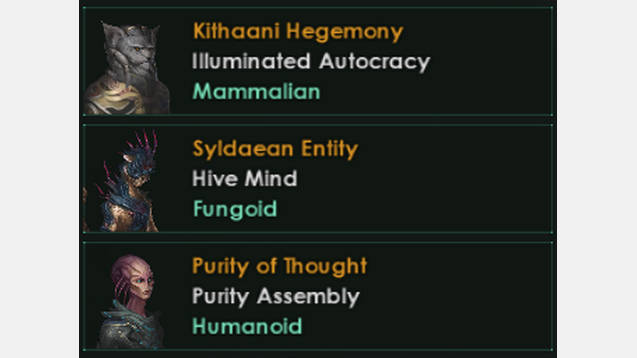 Ascension adds three unique races (based off existing portraits) to the default races list. The new races will spawn in your games, bringing unique systems with them.

Each has a unique starting system, a full bio and a custom starter message, all with a different concept:
The curious Kithaani start on a Ringworld, but they are not quite alone on it. The Kithaani also have their own name list.
The Syldaean hive originates in a system devastated by an ancient nuclear war.
The Yldar purifiers reside in a Gaia world paradise, from which they will cleanse the galaxy of all things alien.

For all the races, their planetary preference limits them greatly in expanding their space, but they can still spread throughout their own star system and it is up to you how to expand your empire – If at all. Robots, genetic engineering, bloody conquest, alliance building, the galactic purge. The choice is yours!

Note:
1) The Mod was created to encourage playing tall in a single system. Your starting system is far richer than most as a result, and your habitability is severely constrained.
2) You can also choose the special starter systems for your own races if you want to, which may be rather overpowered since your planet preference will not be as limited as the mod’s races. Significantly dial up the difficulty if that is the case.

Version: This is an update for Stellaris 1.6.