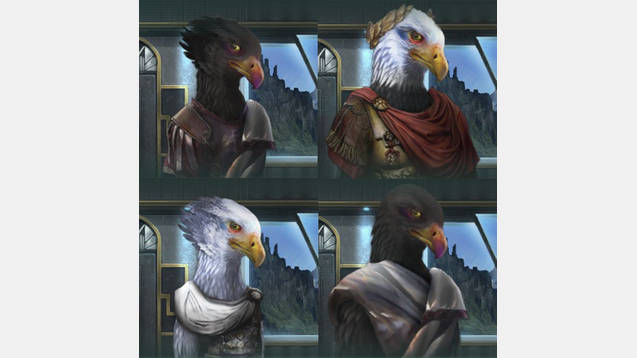 Contents
Animated Portrait Set
Fully animated space roman eagles portrait set.
They twitch, and look around, and breathe, and blink just like vanilla portraits. They come in different colors, have sexual dimorphism and custom clothes.
You can easily use this set to create any Custom Empire you like, just like for the vanilla portraits.

Custom City Set
Based on the reptilian set, with added marble temples.

Custom Starting Solar System
Chermergatus: a large trinary system with two red dwarves and one supergiant. The starting planet is an alpine world, orbiting around the second star. It offers a relatively strong start, as the main star of the system produces a lot of energy and one of the neighboring systems hosts the ruins of an old Ringworld, which might facilitate your species in researching mega-structures.

Custom AI Personality
If my Custom Empire (and only that one) of Aquilesi is moved by the AI, it will acquire by default the Cosmopolitan Hegemons personality. This AI will be happy to trade and integrate xenos in its society, but it will also maintain a fairly predatory stance towards small neighbors. It is also paired with about 30 new lines of dialogue for the various diplomatic messages.
If you use my Custom Empire, you’ll still have access to some of this content through the tailored custom insults that your diplomat will be able to send to other empires.

Custom Empire
The Enchirian Empire. It’s a militarist/authoritarian/xenophile oligarchy with citizen service and nationalistic zeal. The Aquilesi are solitary predators themselves, but they make for charismatic leaders when ruling over other species.
Since this mod does not add any gameplay, I’ve set this Empire as capable of spawning on its own (although it won’t spawn always), unless the player is using it, in which case it will never spawn.
If you wish to disable the Empire from spawning without using it yourself, you need to either disable the mod before starting up Stellaris, or go to the mod folder (Steam/SteamApps/workshop/content/281990/… /romaneagles_portraits/prescripted_countries/) open the romaneagles_prescripted_countries file, search for spawn_enabled=yes, and edit it to: spawn_enabled=no.
You can also edit it to: spawn_enabled=always, if you wish the Enchirian Empire to always be spawned in your games (although it’ll still be automatically disabled if you are using it yourself, in order to avoid having twin empires).

Compatibility
This mod does not affect any vanilla files, nor does it add any major gameplay feature. I don’t think it should cause any conflict with most other mods, although there might be exceptions I haven’t thought of.
If you have mods that alter celestial bodies’ proportions, that might screw up the appearance of the main star in the custom system, but it shouldn’t break the mod in any significant way.