AlphaMod: The Utopian Dream For Stellaris 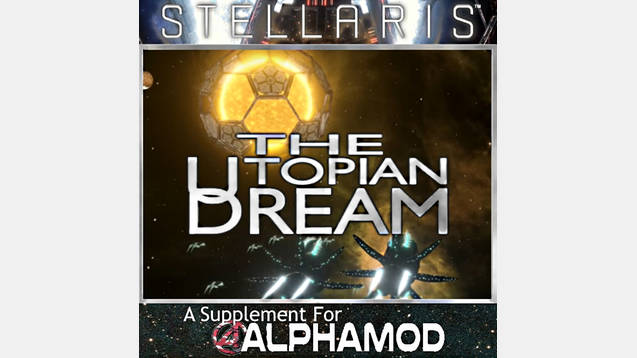 AlphaMod: The Utopian Dream For Stellaris

Megastructures
Genesis Initiator
World-shapers can construct this around uninhabitable barren, molten and frozen worlds. There are three stages to complete and then the planet is turned into a living, breathing planet, capable of sustaining whatever life-forms you see fit to deposit on it. The planet is guarenteed to have three tasty planet modifiers on it and will not explode violently when a klingon falls off a ledge.
Credit for original design goes to: NHunter. Modified with permission.

Equatorial Shipyard
Unlocked by having both Voidborne and Master Builders. Built around a molten planet or a world with a large orbital deposit of minerals, this megastructure consists of two habitable rings. The smaller one, the Processing Ring, focuses on mining and processing of minerals to provide the resources for the larger ring, the Engineering Ring. Massive machinery quickly manufactures starships. Both rings can have a spaceport.
Credit for asset work goes to: Nikkle’s RingWorld Cluster
Credit is also due to Terran538 for his work on Planetary Ringworlds.

Mega-Fortresses
Auxiliary components and specialised station sections for turning Fortresses into far more powerful Mega-Fortresses. A tier 4 tech only available for research after researching mega-engineering, or immediately researched by having both Master Builders and Galactic Force Projection. See the slideshow for more details. Tech is given at the end of a year in a current save-game if you have both perks already.

Habitat Variants
Whilst Voidborne will make all the variants available, they can all be alternatively unlocked by a combination of technologies. Except the Advanced Habitat, which is only unlocked with Voidborne.

Perfect Homeworld: Unlocked by World Shaper. Restricted to use on the homeworld. Immediately increases number of tiles to 25. Cost: 150 Influence.
Master Nature: Unlocked by Mastery of Nature. Restricted to the standard 9 planet-classes. Immediately removes all tile-blockers on that planet, including normally unclearable ones. Cost: 150 Influence.
Hive Minds
Hive Minds can now take The Flesh Is Weak and Synthetic Evolution Ascension Perks. Please note this feature is WIP – pursue at your own risk until I say it’s finished and working.

This supplement is not compatible with Planet Diversity.