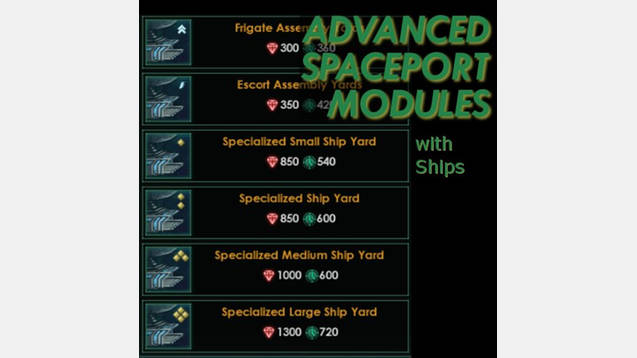 Advance Spaceport Modules adds 8 new ship classes and the techs to activate them.

It adds single spaceport modules for ship assembly yards, many which activate along with the ship tech.
It adds an additional set of specialized ship yards.

Ships have now been added, so you can tune your fleet to your own combat style.
This module was built on top of Advanced Fleet Operations, and that module has been dropped so I added ships.
If you already have AFO you can turn it off.

These ships use the same names so existing games will load, but…
I structured the technologies that activate them differently. That means on an existing game your fleets will still have them but you will not be able to build them again until you research the new technologies. I apologize for the double tech hit.

In play testing with AFO I found the single tech per ship blocking on early tech research. In one example both Interceptor and Assault Ship techs came up as 2 out of the 3 choices. Early game I don’t feel the need to build that many ships so I went with the non-ship tech as the only choice. Later, along came Frigates and I ended up with 3 ship techs out of the 3 choices forcing me to waste time building a tech I did not want just to get passed it. To solve this, I pair up the ships in corvette variants / destroyer variants / cruiser variant techs.

New games will not have this problem.

Fleet Carrier – More hull points and less armor than a battleship, with modules design around hanger bays and point defense.

This module should be compatible with most other modules, except for those that use the same ship names.