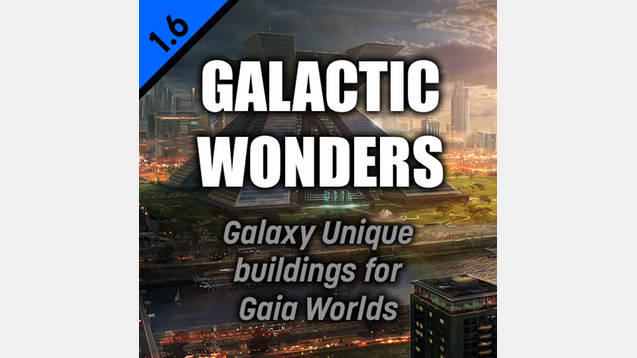 Adds three Galaxy Unique wonders that can only be built on Gaia Worlds.

This allows three special buildings that there can only be one of in the entire Galaxy at any time. They function like Empire Unique buildings, but instead of unique to just the empire, they are unique to the galaxy. They can only be constructed on a Gaia World and if you have researched Mega-Engineering. They provide Empire Wide benefits after building.


New Event: Galactic Wonder Construction
Whenever someone constructs a wonder (and when deconstructed/destroyed) an event will be sent to all empires notifying them of who and where constructed the wonder.

Requirements to build wonders
Only one per galaxy of each type
Mega-Structures (rare tech) must be researched
Can only be constructed in the unqiue environment of Gaia worlds
Existing constructions will be cancelled if multiple are being built when one is constructed
Compatibility
No vanilla files have been modified.
This should work will all other mods without issue.
Localization
Currently only localized for English. Please post below if you can help with localized strings to include in the mod and I will update it.

My Steam Workshop page
I focus on making mods that compliment the vanilla game, so if that is your thing, please check out my steam workshop page for my other mods for stellaris.

If you liked the mod, please rate it!